Every quality instrument is tuned to a reference frequency. The international standard reference for music instruments is A = 440 Hz. This means that all instruments that are tuned to this reference will play in tune together.

But a flute can be tuned to any other reference also.  432 Hz is an alternative tuning, said to be more in balance with the earth and the human body. References like 440 Hz are said to be out of balance or in disharmony with nature.

432 Hz is therefore widely used in music healing & therapy, shamanism, and meditation/yogic practices. So if any of these practices is what you're using your Native American Flute for, then 432 Hz is probably your best choice. If you want to dive deeper into 432 Hz tuning, I recommend reading my page on Native American Flutes in 432 Hz.

Can I play different scales/types of music on my Prana flute?

How do I take care of my Prana flute?

If you want your flute to be with you for a long time, it's important to take good care of it. Some things to avoid are putting it directly into the sun or next to a heat source, like a stove for example. This might dry out your flute and damage it. Also, always make sure to put your flute safely in its bag when you're not using it, to avoid scratches from normal use.

Once or twice a year, it is also a good idea to treat both insides chambers with plenty of pure almond oil. This natural oil is readily available in most countries, penetrates very well into the wood and is effective against bacteria and funghi.

To oil your flute, gently remove the decorative pearl from the leather strap and untie the block. Make sure you remember how to put it back on afterwards. When the block is loose you can apply oil to the inside of both chambers of the flute, on the small track that connects them, and at the bottom of the block itself. Let it sit for an hour and wipe off the exces oil. Then let your flute dry for about one day after doing this, before cleaning it with a towel and putting the block back on.

What's that tied-on part on top of a Native American flute?

The "block", "fetish" or "totem" is an essential part of any Native American Flute. Aesthetically it can be anything, but underneath it lies the sound mechanism that creates the typical Native American sound. It exists of a plug seperating two different air chambers, on top of which lies a very precise and shallow track. The air passes through this track after which it is blown onto a sharp edge and split into the sound chamber, vibrating and creating the sound.

My flute suddenly stopped sounding nice. What can it be?

If this is the case, there might be one of the following easy-to-fix issues:

If you played for a long time, the sound of your flute will start to get weaker, until starts choking. This is normal for Native American Flutes. The reason behind it is moisture build-up in the "track" of your flute, the part just underneath the decorative block, that will obstruct the airflow. The best thing you should do is let your flute rest for a while. The track will automatically dry out and it will play as new. Never put your flute next to a heating source for drying as this can damage the flute by drying it out completely.

2) The "totem" is in the wrong position

The "Block" or "Totem" is an essential part of your Native American Flute, and also crucial is its position. If it's in the wrong place, it will make your flute difficult to play and it will sound "wrong". The end of the block should line up perfect with the rectangular sound hole in the flute itself, and the two horizontal "feet" parallel with it, just like in the following image: 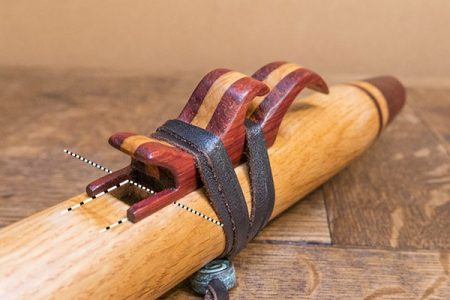 Are there additional costs related to ordering a flute?

Besides shipping costs, all orders within the eurozone and to the USA (for orders below USD 800) will not have any additional taxes or fees upon arrival. If you are ordering from outside any of these zones please be aware that in some cases, additional costs may be charged by your government depending on where you are located. Please be informed that these taxes (if applicable) are your responsibility, and cannot be reclaimed.