Pentatonic flutes have been with us for millennia thanks to their natural and easy-to-play scales. On this page I explain what exactly is a pentatonic flute, how Native American Flutes use this pentatonic scale, and I describe what the advantages of a penta-chromatic flute are.

A pentatonic scale literally means any scale, or sequence of notes, that has five (penta = five in Greek) notes in an octave. An octave or perfect octave is the interval between one musical pitch and another with double its frequency. So exactly the same note, but one pitch higher. The most basic pentatonic flute will therefore have five holes: one hole for every note in the scale. 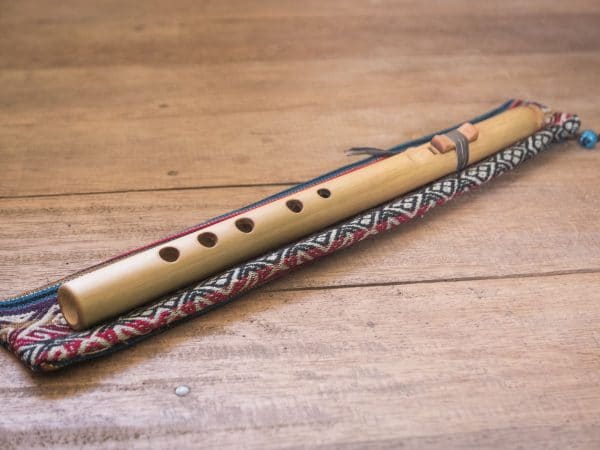 Pentatonic scales were developed all over the world and by many civilizations, including tribes in Northern America. These tribes also developed the famous pentatonic 'minor' scale. This type of pentatonic scale alternatingly skips one or two notes to reach the octave note.

The magic of the pentatonic minor scale is that all of the notes in it are in perfect harmony with each other. Every combination of its five notes sounds beautiful, so it can be played and improvised without any musical knowledge or interference of the mind, making it ideal for meditation purpose.

Then why does a Native American Flute often has six holes? Because by adding one extra note to the pentatonic scale, by adding a sixth hole, it becomes possible to play another, totally different, pentatonic minor scale on the same flute.

Taking it even one step further is tuning a Native American Flute to a full chromatic scale, while preserving its original pentatonic tuning.

While the pentatonic minor scale is beautiful in its simplicity, it is limited to only five (or six) notes. In western music for example, we use the chromatic (chroma = twelve in Greek) scale that has twelve notes or semitones per octave. Playing western music on a basic pentatonic flute is therefore often impossible, because it is missing roughly half of the notes.

Luckily, and with some extra work, it is possible to add the missing chromatic notes to a pentatonic minor flute by giving it a penta-chromatic tuning. This additional tuning doesn't change the basic pentatonic tuning, but it makes possible to play all of the remaining chromatic scale's notes (except for the minor second) on your flute, by use of cross-finger combinations. Your flute now has eleven instead of five notes, while still being as easy to play as any pentatonic flute. 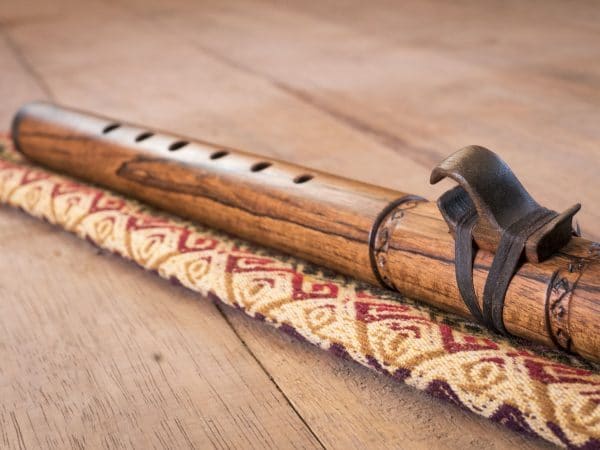 All of the Native American Style Flutes in my flute store have this penta-chromatic tuning. Flutes tuned in this way look and play like any other pentatonic flute, but they also have the possibility to go beyond playing the basic pentatonic scale.

When searching for Native American Flutes, please be aware however that most of them do not have this penta-chromatic tuning, unless explicitely mentioned.

So, why is a penta-chromatic flute any different from a normal western flute? The basic scale on a Western flute has a heptatonic (hepta = seven in Greek) scale with seven basic notes, not a pentatonic scale. The heptatonic scale is not harmonic, which means that wrong note combinations happen all the time if you don't 'know' what you are playing.

Additional notes in the second octave

Native American Flutes usually play one octave. This is because of the way they are designed. But again with some extra work, it is possible to make them play higher notes in the second register, above the octave note.

When playing a Native American Flute you can freely play the pentatonic scale without thinking and worrying about false notes. There are no mistakes. The mind becomes redundant and you can play from your heart.

When a pentatonic flute also has a chromatic tuning added to it, it becomes possible to play a whole range of different notes, and opens op the door for playing all types and styles of music, including western songs. And when designed in the right way, Native American Flutes can even play some notes in the second register.

If you want to learn more on how Prana flutes are tuned, read my page on professional tuning. If you would like to see my available flutes with penta-chromatic tuning just take a look at my flute store. All my flutes here have this tuning.