Once, untold generations ago, the people did not know how to make flutes. Drums, rattles, bull-roarers, yes - but not flutes. In these long-past days, before the white man came with his horse and firesticks, a young hunter went out after game. Meat was scarce, and the people in his village were hungry. He found the tracks of an elk and followed them for a long time. The elk was wise and swift. It is the animal that possesses the love-charm. If a man has elk medicine, he will win the one he loves for his wife. He will also be a lucky hunter. 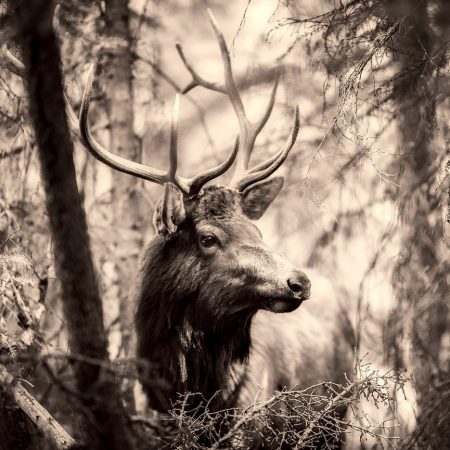 Our poor young man had no elk medicine. After many hours, he finally sighted his game. The young hunter had a fine new bow and a quiver made of otter skin full of good, straight arrows tipped with points of obsidian - sharp, black, and shiny like glass. The young man knew how to use his weapon - he was the best shot in the village - but the elk always managed to stay just out of range, leading the hunter on and on. The young man was so intent on following his prey that he hardly took notice of where he went.

At dusk the hunter found himself deep inside a dense forest of tall trees. The tracks had disappeared, and so had the elk. The young man had to face the fact that he was lost and that it was now too dark to find his way out of the forest. There was not even a moon to show him the way. Luckily, he found a stream with clear, cold water to quench his thirst. Still more luckily, his sister had given him a rawhide bag to take along, filled with wasna - pemmican-dried meat pounded together with berries and kidney fat. Sweet, strong wasna - a handful of it will keep a man going for a day or more. After the young man had drunk and eaten, he rolled himself into his fur robe, propped his back against a tree, and tried to get some rest. But he could not sleep. The forest was full of strange noises - the eerie cries of night animals, the hooting of owls, the groaning of trees in the wind. He had heard all these sounds before, but now it seemed as if he were hearing them for the first time. Suddenly there was an entirely new sound, the kind neither he nor any other man had ever experienced before.

It was very mournful, sad, and ghostlike. In a way it made him afraid, so he drew his robe tightly about him and reached for his bow, to make sure that it was properly strung. On the other hand, this new sound was like a song, beautiful beyond imagination, full of love, hope, yearning. And then, before he knew it, and with the night more than half gone, he was suddenly asleep. He dreamed that a bird called wagnuka, the redheaded woodpecker, appeared to him, singing the strangely beautiful new song, saying, “Follow me and I will teach you.” 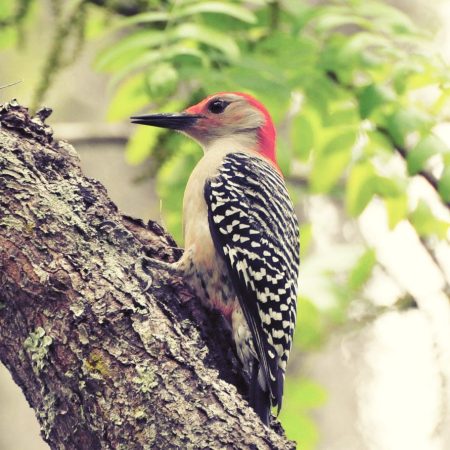 When the young hunter awoke, the sun was already high, and on a branch of the tree against which he was leaning was a redheaded woodpecker. The bird flew away to another tree and then to another, but never very far, looking all the time over its shoulder at the young man as if to say “Come on!” Then, once more the hunter heard that wonderful song, and his heart yearned to find the singer. The bird flew toward the sound, leading the young man, its flaming red top flitting through the leaves, making it easy to follow. At last the bird alighted on a cedar tree and began tapping and hammering on a dead branch, making a noise like the fast beating of a small drum. Suddenly there was a gust of wind, and again the hunter heard that beautiful sound right close by and above him.

Then he discovered that the song came from the dead branch which the woodpecker was belabouring with its beak. He found, moreover, that it was the wind that made the sound as it whistled through the holes the bird had drilled into the branch. “Kola, friend,” said the hunter, “let me take this branch home. You can make yourself another one.” He took the branch, a hollow piece of wood about the length of his forearm, and full of holes. The young man walked back to his village. He had no meat to bring to his tribe, but he was happy all the same.

Back in his tipi, he tried to make the dead branch sing for him. He blew on it, he waved it around - but no sound came. It made the young man sad. He wanted so much to hear that wonderful sound. He purified himself in the sweatlodge and climbed to the top of a lonely hill. There, naked, resting with his back against a large rock, he fasted for four days and four nights, crying for a dream, a vision to teach him how to make the branch sing. In the middle of the fourth night, wagnuka, the bird with the flaming red spot on his head, appeared to him, saying, “Watch me.” And in his vision the young man watched - very carefully.

When he awoke he found a cedar tree. He broke off a branch, and working many hours hollowed it out delicately with a bow-string drill. Just as he had seen wagnuka do it in his vision. He whittled the branch into a shape of a bird with a long neck and an open beak. He painted the top of the bird's head red with washasha, the sacred vermilion colour. He prayed. He smoked the branch with incense of burning sage and sweet grass. He fingered the holes as he had watched it done in his dream, all the while blowing softly into the end of his flute. Because this is what he had made - the first flute, the very first siyotanka. And all at once there was the song, ghostlike and beautiful beyond words, and all the people were astounded and joyful.

In the village lived an itancan, a big and powerful chief. This itancan had a daughter who was beautiful, but also very haughty. Many young men had tried to win her love, but she had turned them all away. Thinking of her, the young man made up a special song, a song that would make this proud wincincala fall in love with him. Standing near a tall tree a little away from the village, he blew his flute. 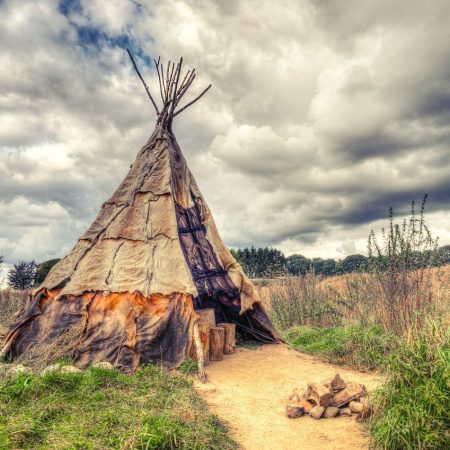 All at once the wincincala heard it. She was sitting in her father's, the chief's, tipi, feasting on much good meat. She wanted to remain sitting there, but her feet wanted to go outside; and the feet won. Her head said, “Go slow, slow,” but her feet said, “Faster, faster.” In no time at all she stood next to the young man. Her mind ordered her lips to stay closed, but her heart commanded them to open. Her heart told her tongue to speak.

“Koshkalaka, washtelake,” she said. “Young man, I like you.” Then she said, “Let your parents send a gift to my father. No matter how small, it will be accepted. Let your father speak for you to my father. Do it soon, right now!”

And so the old folks agreed according to the wishes of their children, and the chief's daughter became the young hunter's wife. All the other young men had heard and seen how it came about. Soon they, too, began to whittle cedar branches into the shapes of birds' heads with long necks and open beaks, and the beautiful haunting sound of flutes travelled from tribe to tribe until it filled the whole prairie. And that is how siyotanka the flute came to be - thanks to the cedar, the woodpecker, the wind and one young hunter who shot no elk but who knew how to listen...

This legend was edited from historical documents and is believed to be of public domain. If you feel inspired by this legend, I make birdhead-shaped flutes honoring the Siyotanka legend. If you want to know the story behind Prana flutes, read the about Prana flutes page.